In collaboration with the Burrows group (University of Utah) we have a continuing interest in the use of biological nanopores to interrogate DNA structure. Much of our current work focuses on the use of the protein pore alpha-hemolysin (αHL) particularly for the identification of DNA damage. DNA damage is a significant issue in human cells, to take just one example de-purination of adenine occurs approximately 18,000 times in each cell per day. Unrepaired damage leads to mutations that in turn are responsible for the formation of cancers.

While ssDNA can pass through the smallest constriction in αHL (1.4 nm), dsDNA, which has a nominal diameter of 2.0 nm, cannot. However, it is possible to capture dsDNA inside the α-HL vestibule, and with an appropriate voltage (> 100 mV) the dsDNA duplex will unzip into its constituent single-stranded components. The residence time prior to unzipping is dependent on the composition of the duplex. We have recently discovered that structural modifications in dsDNA can be detected from the magnitude to which ion flow is attenuated during dsDNA residence inside the protein pore. The precise change in current is dependent on the position of the missing base in the sequence relative to the latch constriction of the α-HL protein pore, a newly discovered sensing zone in DNA (see figure below). We are currently exploring uses of this sensing zone for identifying and discriminating damage sites in dsDNA. 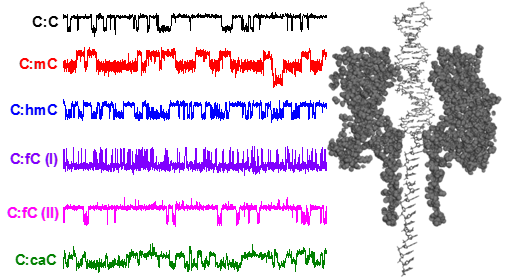