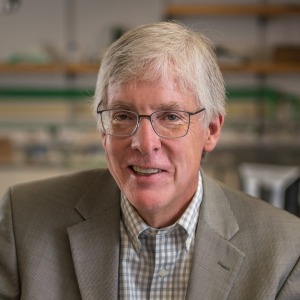 My colleagues and I are engaged in both experimental and theoretical aspects of electrochemistry, with diverse connections to analytical, biological, physical, and materials chemistry. Please see our group website for fuller project descriptions and links to recent publications.

Transport in Thin Layer Batteries. We are studying ion transport in batteries in which the anode and cathode is separated by a ultra-thin electrolyte layer (10s of nanometers wide). At this length scale, the electrical double layers that form at both the anode and cathode begin to overlap which results in changes in the molecular transport (diffusion and migration) of ions. We investigate this phenomenon both theoretical, using finite element simulations, and experimental, using nanometer-scale electrochemical cells.

Nanopore Analysis of DNA. The protein pore αHL has emerged as a powerful tool with which DNA can be analysed. While ssDNA can pass through the smallest constriction in αHL (1.4 nm), dsDNA, which has a nominal diameter of 2.0 nm, cannot. However, it is possible to capture dsDNA inside the α-HL vestibule and unzip it into its constituent single-stranded components. We have recently discovered that structural modifications in DNA in a duplex can also be detected from the magnitude to which ion flow is attenuated during dsDNA residence inside the protein pore. We are currently exploring uses of this sensing zone for identifying and discriminating damage sites in dsDNA.

Nanopore Physics. Ion transport in confined geometries is significantly different from bulk solutions. For example, ion current rectification (ICR) in nanopores is a phenomenon that arises due to the asymmetric charge distribution of the nanopores. Our group has discovered a number of interesting ion transport and fluid phenomena in nanopore systems, including negative differential electrolyte resistance in which a fluid bistability results in a decrease in current with increasing applied voltage.

Nanoparticle Analysis. We have developed an understanding of the dynamics of particles travelling through pores, the forces involved, and the various ionic contributions to the shape of the resistive pulse. This understanding has enabled us to develop a multipass resistive pulse method, where we switch the pressure/voltage to repeatedly pass individual nanoparticles back and forth through the orifice of a conical nanopore/nanopipette. This leads to a precisely determined mean blocking current equating to sub-nanometer particle size resolution. We are currently exploring controlled delivery of single particles & molecules to electrochemical interfaces.

Nanobubbles. Gas nanobubbles formed at solid/liquid interfaces have received significant attention during the past decade due to their remarkable properties. We have developed an electrochemical approach for investigating the formation and properties of single nanobubbles of H2, N2, CO2, or O2 using Pt disk electrodes radii between 5 and 50 nm. The nanobubble experiments reveal the nucleation mechanism of single nanobubble at the interface, as well as provide insight into the structure and chemical dynamics of electrochemical three-phase solid/liquid/gas boundaries.

Modeling Experimental Systems. For the systems investigated in the our group, the experimentally measured quantity is most typically the current, or a statistical measure derived from it, whereas our interest usually lies in the underlying physical and chemical phenomena. Interpretation of our data is typically underpinned by a theoretical model of the system, which may be an analytical expression or a numerical calculation, relating the measured quantity to one or more physical quantities. Typical problems include, for instance, relating electron-transfer rates with the local electrostatic potential distribution, computing the forces of a nanoparticle and its resulting velocity, or studying the effect of ion transport in confined spaces on the discharge rate of a 3D battery.