All of our instruments use a pulsed laser to vaporize a metal target. Vaporization involves the deposition of approximately 10 mJ of tightly focused laser energy onto the metal sample in just 10 ns to generate an extremely hot plasma (about 10,000 K). The resultant plasma and all its contents (metal atoms, metal ions, and electrons) are then swept into the vacuum chamber by high pressure helium (1-10 atm) that is flowing over the metal target at the same time. In our source chamber, the expansion into vacuum occurs through an orifice with a diameter (2 mm) that is much larger than the mean free path (5 nm) of the gas expanding through it. What this means is that the contents of the expansion undergo numerous collisions upon exiting the high pressure region over the metal sample. This type of expansion is called a supersonic expansion because the ultimate speed attained by the particles in the beam is much greater than the local speed of sound, which drops to very low values as the gas expands and cools. What is important to us is the fact that the large number of collisions upon expansion serve to cool the contents of the beam electronically, vibrationally, and rotationally. Typically, vibrational motions are cooled to 50-100 K and rotational motions to 5 K. This greatly simplifies the spectra we observe. The simplification results from the fact that all the molecules are in just a few quantum states. The only transitions that can be observed originate from these few populated levels. Some of the molecules we have studied would absorb light everywhere (and their spectra would be absolutely uninterpretable!) if it weren't for supersonic cooling.

In most of my past work, the expansion gas was helium or argon. In more recent work, however, we have been seeding our expansion with small amounts of other gases, such as CH4, C2H2, NH3, SiH4, H2S, H2Se, etc. The extreme conditions of the plasma allow the reactant gases to break apart into atoms or radical fragments that then react with the metal atoms in the plasma. The result of this plasma chemistry has been an array of new molecules that I describe in the next few sections. 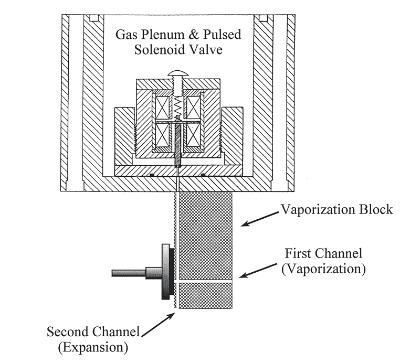