The cryo-cooled ion photodissociation spectrometer, which is currently under construction, will use an ion source, which could be a laser-ablation metal cluster ion source, an electron-impact ion source, or an electrospray ion source.  Ions produced in the source will be mass-selected with a quadrupole mass filter and trapped in a radio-frequency ion trap that is mounted on a cold head that can be cooled to temperatures below 5K.  A low pressure of helium will be present in the trap, and the helium atoms will be cooled to low temperatures by collisions with the cold metal walls of the trap.  Subsequent collisions between the cold helium atoms and the trapped ions will cool the ions to low temperatures.  We anticipate being able to rotationally cool ions to temperatures below 20K.

At this point, the trapped ions are irradiated with laser light, and if the light is absorbed and the ion dissociates, a plot of fragment ion signal as a function of laser wavelength provides the spectrum.  In the instrument, the ions are given about 2 ms to fall apart, and then they are released from the trap into a second quadrupole mass filter.  The quadrupole is set to transmit ions at the mass of the fragment to a Daly detector, which is a specialized detector that counts individual ions. Using a 22 pole trap, we have been able to trap at least 30,000 ions – far more than needed for an experiment. I anticipate that we will be able to use this device to study a very large number of small molecules that have never been studied previously.  These include small metal-ligand complexes such as M +×CO, M +×H2O, M +×NH3, M + × H2C=CH2 , and M + × HCºCH, all of which are of relevance to catalysis.  I also plan to study small metal clusters such as Cr2+, Cr3+, Ti2+, Cu2+, Cu3+, etc.  The number of molecules waiting to be studied with this new instrument is vast, and entirely new families of molecules will be accessible for study when the instrument is completed. 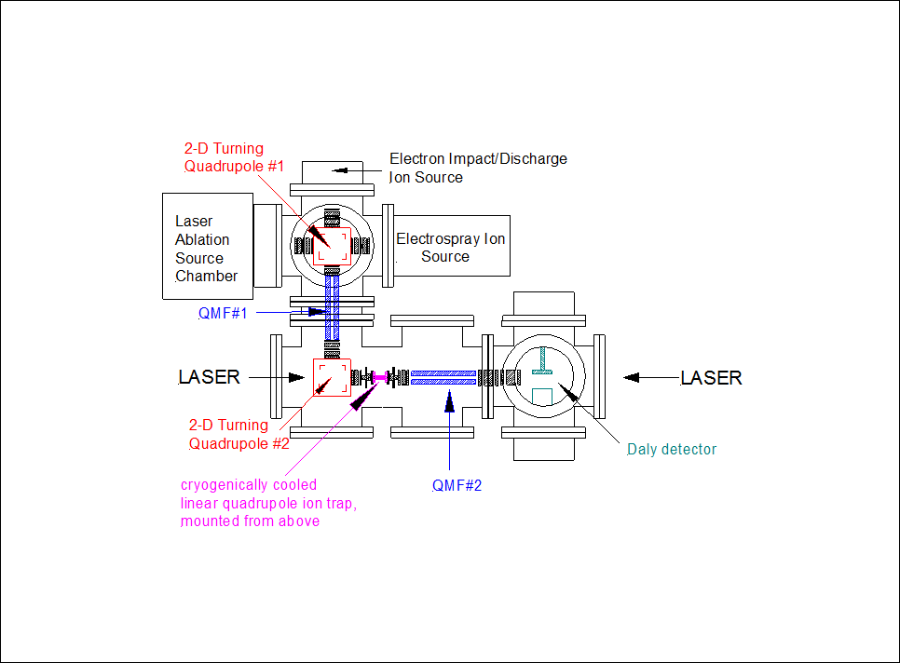