To complement the capabilities of the R2PI spectrometer we have built a dispersed fluorescence (DF) spectrometer. In this instrument, the molecules entrained in the supersonic expansion are crossed with a tunable dye laser beam, and any fluorescence which is emitted is collected with a system of lenses and sent into a spectrograph. Within the spectrograph, the collected light strikes a diffraction grating and is dispersed into its wavelengths, with different wavelengths being brought to a focus at different positions on a CCD (charge-coupled device) detector array. The CCD allows signals to be integrated over a long period of time and then sent to a computer for storage and analysis.

Once a transition in a molecule of interest has been identified on the R2PI spectrometer, the sample may be brought over to the DF spectrometer so that the fluorescence from the initially pumped level may be examined. Since the molecules are isolated from collisions in a molecular beam, no collisional deactivation is possible, and all fluorescence originates from the initially pumped level. Fluorescence to the various vibrational levels of the ground state occurs at different wavelengths, and measurement of these emitted wavelengths allows the vibrational levels of the ground state to be deduced. Moreover, if low-lying excited electronic states are present, fluorescence to these states allows them to be located and their vibrational levels to be measured as well. Unlike the R2PI spectroscopic method, it is not as obvious which molecule gives rise to a particular fluorescence signal, and this is why both machines are crucial to a full understanding of a new molecule. 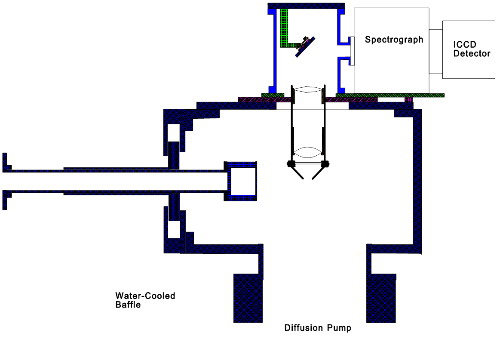