Cells thrive on redox processes, but when free radical oxygen species get out of control, the DNA base guanine (G) is a target. Complex heterocyclic chemistry ensues, and the formation of various oxidized lesions in DNA depends upon the intricacies of cellular chemistry as well as the DNA sequence and secondary structure. G oxidation to 8-oxoG (OG) is somewhat mutagenic if not repaired, and an accumulation of DNA damage and mutations can lead to cancer.

On the flip side, we have shown that OG in a G-quadruplex (G4) sequence in a gene promoter can be a natural response to oxidative stress by turning on (or off) gene expression via base excision repair.  In this sense, what was thought to be ‘damage’ might actually be called ‘epigenetic.’  We are examining the molecular mechanisms of this pathway. 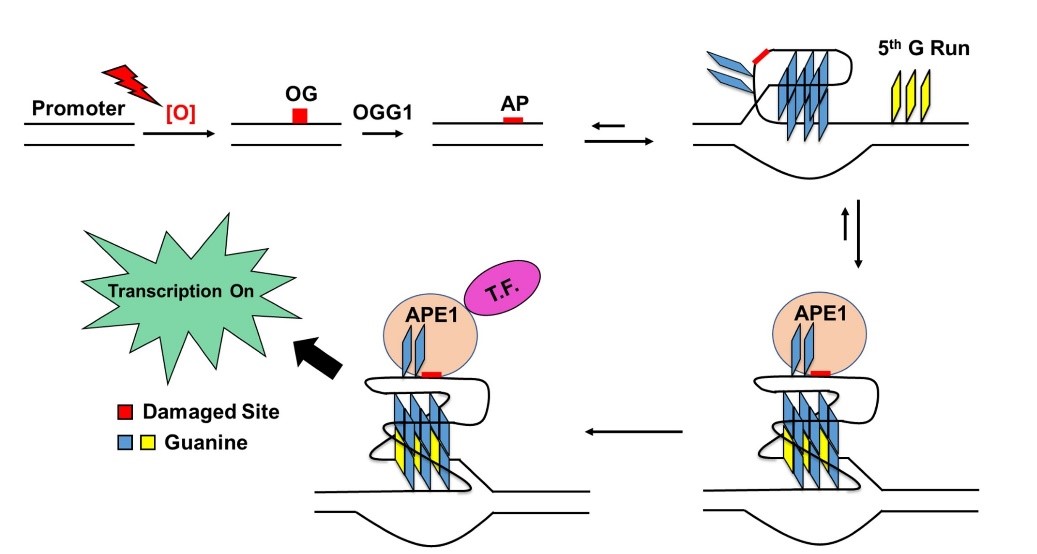 Sequencing for Base Modifications in DNA

A key tenet of our oxidative ‘damage/epigenetics’ hypothesis is that guanine oxidation is focused in specific regions of the genome, notably G-rich regions such as telomeres, gene promoters, and other regulatory elements.  We continue to investigate approaches to sequencing DNA for base modifications such as OG, Sp and Gh.  Here’s a timeline:

Base Modifications in RNA

As in DNA, base modifications in RNA play key roles but they are rare compared to unmodified bases.  Why are certain bases in specific locations subject to installation of modifications?  Both sequence and secondary structure can play a role.  We found that G-rich sequences in mRNA and viral RNA (Zika, HIV, HepB…) contain potential G-quadruplex sequences, and these co-locate with the epitranscriptomic modification m6A.  For other base modifications in RNA, the correlation to folded motifs is less obvious.  In collaboration with the Cairns laboratory, we have found methods to sequence for pseudouridine, a modified base that may be correlated to cellular stress.

Beyond the Watson-Crick canonical duplex, most genomes include sequences capable of alternative folding to G-quadruplexes and i-motifs.  We are interested in the following questions: