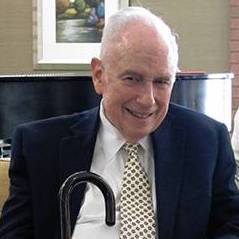 A lifetime of devotion to family church and science. Edward (Ted) Marcus Eyring died on February 20, 2021, he was born January 7, 1931 in Oakland California to Henry Eyring and Mildred Bennion Eyring. He grew up in Princeton, New Jersey where he was the only LDS student at Princeton high school, and where all of the church meetings he attended were in the dining room at his home. He served two and a half years in the Paris France mission.

He married Marilyn Murphy on December 28, 1954. He graduated from the University of Utah where he was a member of Phi Beta Kappa and Phi Kappa Phi. He did a 2 1/2 year tour of duty with the Air Force. In 1960 he earned his doctorate, spent a year in Germany as a Guggenheim fellow and then joined the chemistry faculty at the University of Utah. Over the next 50 years Ted co-authored many scientific papers with his gifted students and faculty collaborators. The most important product of his teaching and research was the training of about 100 pre-and post doctoral students who have made important contributions to science. One of his favorite professional activities was writing informative letters of recommendation for his former students. One of Ted’s innovations was the introduction of service learning field projects into his classes. He received a number of awards for scientific research but his favorite recognitions were those his students awarded for exceptional teaching.

Ted served in many capacities in the LDS church in both teaching and leadership including serving as bishop twice. He loved his family and spent countless hours at athletic games, musical programs, and other family activities. He loved the annual trip to Laguna Beach, cruises, and other trips with his family. He and Marilyn love to travel and visited often foreign countries all over the world. For years he was an avid racquetball player.

He is survived by his wife of 66 years, children Steven and Jill Eyring, Valerie LaHaye, David and Juli Eyring, his brothers Henry B Eyring and Harden Eyring, 11 grandchildren and 18 great grandchildren. He was preceded in death by his parents, his daughter Sharon and great granddaughter Addyson.

Interment will take place in the Salt Lake City Cemetery.

If you would like to make a donation to the Ted Eyring Lectureship Endowment you can do so in one of three ways:

1. Online: Click HERE and include in the special instructions that you would like your gift to go to the "Ted Eyring Lectureship Endowment"

2. Send a check with a note specifying you'd like your gift to go to Chemistry's Ted Eyring Lectureship Endowment to: