Cantwell is a chemistry prof, a Ph.D., a wife, a mother of triplets and “insanely athletic.”

By Scott D. Pierce, reprinted from the Salt Lake Tribune 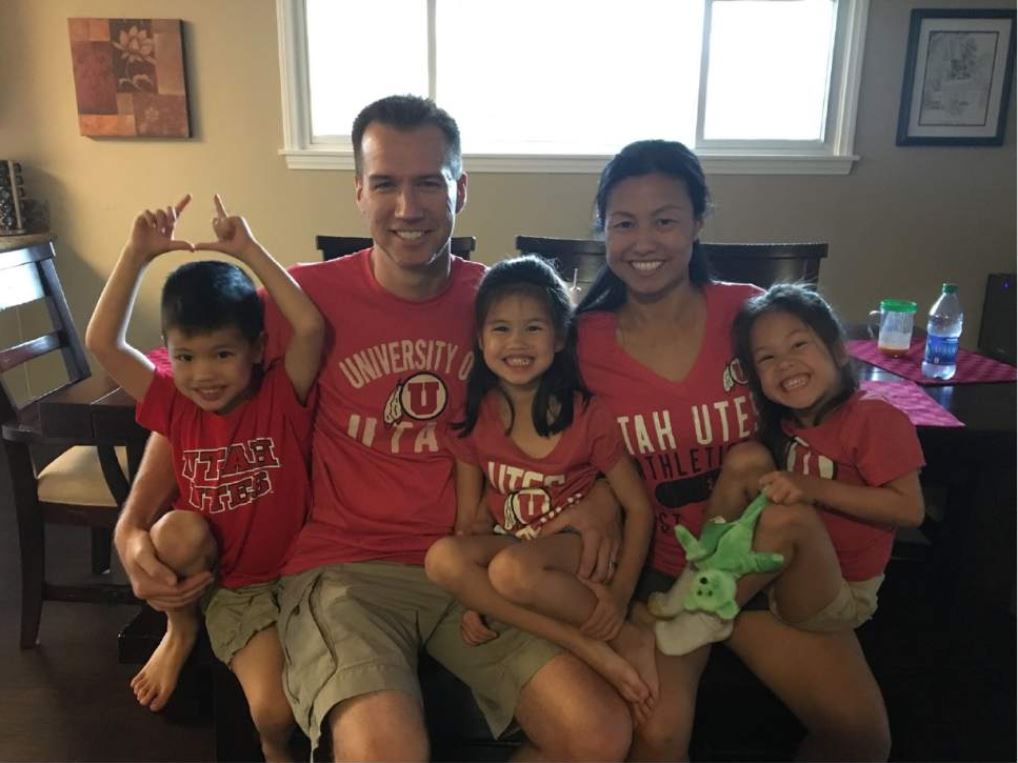 University of Utah professor Janis Louie Cantwell knows she isn’t exactly a favorite to be the winner in the upcoming season of NBC’s “American Ninja Warrior.”

The tenured U. organic-chemistry professor — a graduate of UCLA with a doctorate from Yale — is 5-2, 120 pounds, 44 years old and female. Oh, and she and her husband, Chris, are the parents of 5-year-old triplets.

“My husband and I joke that, from the very beginning, we were on zone defense,” Cantwell said.

Height is perhaps the only way she comes up short.

“I think that ‘driven’ and ‘ambitious’ and ‘competitive’ are adjectives that anyone who knows me really well would call me,” she said.

And, while a demanding, full-time career in a male-dominated field and three young children would be enough to keep anyone busy, Cantwell makes time to train.

“I think it’s really easy to say, ‘Oh, I only have 15 minutes. That’s really not much of anything, so I’m not going to do anything.’ And I try not to do that.”

The driven, ambitious and competitive chemistry professor is also “insanely athletic,” as her husband put it. She’s a former gymnast; she was a cheerleader at UCLA; she taught aerobics; she competed as a bodybuilder.

“There are a whole lot of obstacles that I think to myself, ‘If I only had 4 more inches of reach, this would be so easy,’ ” Cantwell said with a laugh.

The Cantwells are longtime fans of the show, and when they learned there would be a “Ninja”-type competition in Ogden this past August, they decided to attend as a family. But the minimum age for spectators was 8 — except for the children of contestants.

“So my husband said, ‘You should compete.’ And, like a normal person, I said to him, ‘What, are you crazy?’ ” Cantwell said. “At the time, I hadn’t trained. I hadn’t done anything.”

“What’s the worst that could happen?” he said.

They would soon find out. With her husband and kids looking on, she tore her right Achilles tendon as she attempted to run up the Warped Wall — one of the obstacles. She had surgery three days later and was told full recovery would take a year.

“At that point, I was, like, ‘You know, this whole “American Ninja Warrior” thing — maybe I just put that energy somewhere else,’ ” Cantwell said. “ ‘I’ll find another sport. I’ll learn piano. I’ll do something else.’ ”

Cantwell had started the online application, then stopped when she suffered the injury. But a casting director called in January to see if she was still interested.

“My husband said, ‘Yeah, you’ve got to do it!’ And I said, ‘I just started exercising. What are you talking about?’ ” Cantwell said.

The show was accommodating, allowing her to try out at one of the later regional competitions. (Cantwell is in Oklahoma City for the first round of “American Ninja Warrior” competition on Friday and Saturday, May 13-14.)

That gave her more time to train, which she was unable to do in earnest until early March. While her Achilles tendon healed, she focused on upper-body strength — a must for “Ninja Warrior.”

“I actually see it as a blessing,” she said.

And the injury resulted in another unexpected blessing. Her aunt, with whom she “grew up more like sisters,” came to help her out after her surgery.

“Immediately after, she was diagnosed with Stage 4 non-Hodgkins lymphoma and passed away in November,” Cantwell said. “I see the Achilles tear as something that gave me two weeks with my aunt that I otherwise wouldn’t have had.”

Cantwell gladly accepts the label of role model, but she said she’s not looking at a potential appearance on network television for that reason. And she knows that, even if she makes it through the course, there’s no guarantee she’ll make it onto an episode of the show, which picks and chooses which contestants get air time.

“I didn’t apply to go to ‘Ninja Warrior’ to say, ‘Hey, world! This is what you guys should think and feel and change!’ ” she said. “But, at the same time, if I can be a role model or an inspiration or just someone who’s different, then, yeah, I’ll take that.”

Cantwell isn’t harboring any illusions about the odds, which are decidedly against her. She isn’t even thinking about following in the footsteps of Utahn Isaac Caldiero, who last year became the first “American Ninja Warrior” contestant to conquer Stage 4 of the competition and win the $1 million grand prize.

“I’m not doing this because I think, ‘Oh, I’m going to beat everybody because I’m the best!’ ” Cantwell said. “Of course, my husband would want me to say that, but why not go for something that’s fun, regardless if everybody thinks I have no chance. So what? I still could be good.”