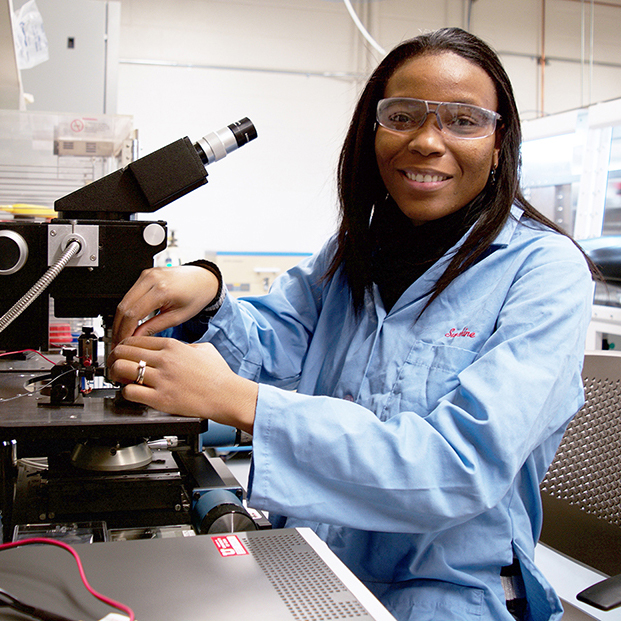 Assistant Professor of Chemistry Luisa Whittaker-Brooks is one of the recipients of the prestigious 2021 Sloan Research Fellowship, given to researchers “whose creativity, innovation, and research accomplishments make them stand out as the next generation of scientific leaders.”

The awards are open to scholars in eight scientific and technical fields: chemistry, computational and evolutionary molecular biology, computer science, Earth system science, economics, mathematics, neuroscience and physics. Candidates must be nominated by their fellow scientists, and winners are selected by independent panels of senior scholars on the basis of a candidate’s research accomplishments, creativity and potential to become a leader in his or her field. More than 1000 researchers are nominated each year for 128 fellowship slots. Winners receive a two-year, $75,000 fellowship which can be spent to advance the fellow’s research.

Whittaker-Brooks, a 2007 Fulbright fellow, earned her doctorate from the State University of New York at Buffalo before a L’Oreal USA for Women in Science Postdoctoral fellowship at Princeton University. Among other awards, Whittaker-Brooks has received a Department of Energy Early Career Award, a Cottrell Research Scholarship, a Marion Milligan Mason Award for Women in the Chemical Sciences and was named one of C&EN’s Talented 12 in 2018.

“I was very excited as this award is a testament to all the great work that my students have accomplished throughout these years,” Whittaker-Brooks said. “I am happy to see that their endless creativity and research work ethics are highly recognized in the field.”

Her research studies the properties and fabrication processes of nanomaterials for potential applications in solar energy conversion, thermoelectrics, batteries and electronics. She and her research group are also testing hybrid concepts to simultaneously integrate multiple functions, such as a nanosystem that scavenges its own energy.

The Fellowship is funded by the Alfred P. Sloan Foundation, a not-for-profit dedicated to improving the welfare of all through the advancement of scientific knowledge. Founded in 1934 by industrialist Alfred P. Sloan Jr., the foundation disburses about $80 million in grants each year in four areas: for research in science, technology, engineering, mathematics and economics; initiatives to increase the quality and diversity of scientific institutions and the science workforce; projects to develop or leverage technology to empower research and efforts to enhance and deepen public engagement with science and scientists.

Since the first fellowships were awarded in 1955, 44 faculty from University of Utah have received a Sloan Research Fellowship.