Valeria Molinero Elected to the National Academy of Sciences 2022 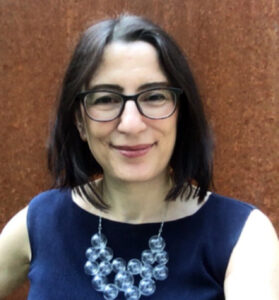 Molinero is the Jack and Peg Simons Endowed Professor of Theoretical Chemistry and the director of the Henry Eyring Center for Theoretical Chemistry. She is a theoretical chemist and uses computer and statistical models to explore the science of how crystals form and how matter changes from one phase to another down to the atomic scale.

Much of her work has involved the transition between water and ice and how that transition occurs in the formation of clouds, in insects with antifreeze proteins, and in food products, especially those containing sugars. Her work has implications for any process in which control of the formation and growth of ice crystals is critical, including snowmaking at ski resorts, protection of crops from freezing, preservation of human organs and tissue for transplant, and production of ice cream and gelato, her favorite food. In 2020, she and her international colleagues demonstrated that the smallest possible nanodroplet of water that can freeze into ice is around 90 molecules, a finding that earned them the 2020 Cozzarelli Prize from the journal Proceedings of the National Academy of Sciences.
She is a fellow of the American Academy of Arts & Sciences and recipient of several U awards, including the Distinguished Scholarly and Creative Research Award in 2019, the Extraordinary Faculty Achievement Award in 2016, the Camille Dreyfus Teacher-Scholar Award in 2012 and the College of Science Myriad Faculty Award for Research Excellence in 2011. She has also been honored by the Beckman Foundation with its Young Investigator Award, and by the International Association for the Properties of Water and Steam with its Helmholtz Award.
She heard about her election between the news of a new publication with postdoctoral scholar Debdas Dhabal and preparations for a doctoral student’s dissertation defense. She received a phone call from colleague Dale Poulter, a distinguished professor emeritus and National Academy of Sciences member, to announce her election. “I was shocked,” she says. “To say it was a surprise would not do it justice. It was fantastic.”
Minutes later, she went into the dissertation defense, reflecting on the range of accomplishments represented by the publication, the election and the defense. “All the research is made essentially there, in the work of the students and postdocs,” she says. “There’s satisfaction that comes from seeing someone grow from the beginning of the Ph.D. into an accomplished researcher.”

Past and present U researchers in the National Academies

Below are lists of current or former University of Utah faculty elected to one or more of the National Academies. Note that some were elected before or after their tenure at the university, and that some have died since their election.