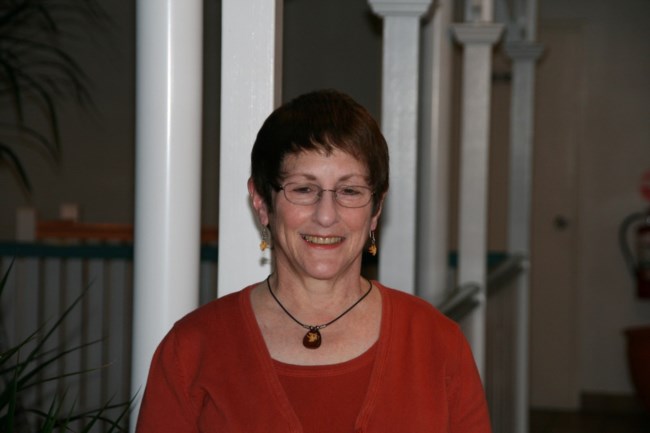 Professor Laya Kesner started as a graduate student at Utah in 1967 and completed a Ph.D. working on the then-new method of field-flow fractionation under the direction of Professor J. Calvin Giddings in 1974.

After a postdoctoral position in Chemical Engineering with Dr. Richard H. Boyd and several different part-time jobs, Kesner began teaching Chemistry and AP Chemistry at Rowland Hall-St. Mark’s School.  When a full-time teaching position opened in the Department of Chemistry, Kesner was selected for the position and came to work for the Department in 1994.

One of those students was Dr. Rebecca Uhlig.  Dr. Uhlig wanted to show her appreciation for her association with Kesner as she prepared to become a Doctor of Optometry.

Dr. Uhlig created the Laya Kesner Awards, presented annually at the end-of-the-year Department Awards Ceremony to deserving undergraduate women (and some men) chemistry majors who enhanced the learning climate in the Department of Chemistry. 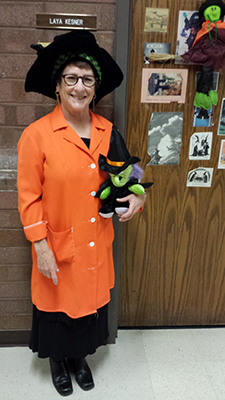 Besides being known for her classroom work, Kesner is also renowned for dressing up as a witch on Halloween. Her office door was decorated with cartoons and images of witches, many given to her by students.

The costume started when Kesner had a job at University Hospital. None of the lab coats were small enough for Kesner, who is petite, so a new one was ordered. When it arrived, to her surprise, it was a bright hunter’s orange. So, Kesner made the most of it by wearing the lab coat with a black dress and a cheap witch’s hat that Halloween. After a few years, her husband enhanced the costume by presenting her with a sturdier Professor McGonagall witch’s hat.

Quoting from her obituary "Laya was dedicated to education and served as a role model for women in the sciences and Jewish studies. She loved travelling with her family, attending the theatre, and visiting art museums. Laya was an excellent cook, who was known for her hospitality and dedication to joyfully celebrating Jewish holidays."

Donations in her name may be made to Congregation Kol Ami, Bais Menachem, and the General Development Fund in the Chemistry Department of the University of Utah (please add "Laya Kesner Award" in the special instructions box).

"Laya became a friend & mentor to me as I started on the path to become a doctor in a time & place that was not exactly welcoming to women. As the solo female PhD student in her class and many years as the solo female faculty on the U's Chemistry Dept, she was a beacon of living proof women indeed belonged. She once confided to me that my father was her only PhD classmate who would share notes with & support her if she was absent to care for her baby back then. So when I turned up in her Intro to Chem accelerated course one summer ~27 YEARS later, she recognized my surname and offered support. She was genuinely gracious & generous with her time if ANY student would just ask.

"In gratitude, I funded the Laya Kesner Award at the U's Chemistry dept, to ensure for once a mentor would be thanked & remembered for their kindness & time spent helping students. I hope it allows a continuation of the chain of kindness started by my father & Laya so many years ago when they were students, and reminds us all to do an act of kindness that can uplift someone and outlast our (relatively) short lives on this earth. Thank you again, Laya."

"Laya Kesner was one of our closest friends as well as a delightful colleague. She was a wonder woman able to work all day, host a large number of people for dinner, and be back at work early the next morning in addition to attending services.

A friend of ours told us that when Laya taught her son's chemistry class at Rowland Hall, she developed his interest in science and thought that he never would have gone to medical school had it not been for what Laya taught him and how she encouraged him in the sciences.  Her nurturing and encouraging students also was her hallmark that was rewarded by the establishment of the Laya Kesner Award annually bestowed to outstanding undergraduate students by Rebecca Uhlig.

She would always be there for us. If we were ill or post-surgical, she would bring over one of her delicious dinners.  We always looked forward to holidays because we would spend them with Laya and her family. They were very special times. We think of the Kesners as being part of our family.

Those of us who were close to Laya know the difference she made in our lives, and she will be missed.  May she rest in peace.

To Donate in Laya's Memory: