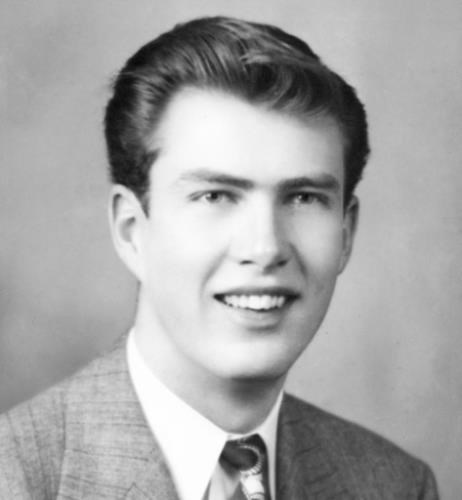 Friend of the department of chemistry, Lawrence Everett Thatcher 96, passed away on October 9, 2020, at the Grand Holladay assisted living center in Holladay, Utah. Lawrence was born on August 12, 1924, in Salt Lake City to Nathan Davis Thatcher and Carolyn Vernell Moody.

Lawrence boyhood home was at 637 Douglas St. He had an enjoyable childhood. He had many friends and adventures in the Douglas St, neighborhood. Summers were spent on the Moody farm in Deseret, UT where he rode horses and helped with the farm work. He lived during the Great Depression which had a strong influence on the way he handled money. He was always looking for the best value. He attended Douglas Elementary School, Roosevelt Middle School, and East High School. He graduated from the University of Utah in 1945 with a degree in Chemical Engineering. He was able to walk to all four of his schools and eat lunch at home. While at the U, he met his sweetheart and future wife, Helen Fougler. After graduation, he got a job with Tennessee Eastmond in Oakridge, Tennessee, where he worked on the atomic bomb for nine months. Lawrence continued to court Helen when he was in Tennessee and when he returned home. They were married on May 28, 1947, in Salt Lake City, and the marriage was solemnized in the Salt Lake Temple on their 25th wedding anniversary, where they were sealed to their four children.

During their remarkable 66 years of marriage, they became a great team. Dad always consulted Mom in all crucial decisions, and he respected her judgment. After he returned home, he worked with his father and brother at Wasatch Chemical for 22 years. Because of a complicated ownership situation, he left Wasatch Chemical and started Thatcher Chemical Company with his brother Winston in 1967. Overcoming the obstacles of starting a new business was difficult, but Lawrence and everyone in both families worked in the business. Helen spent ten industrious years working full time helping her husband. She did this with three teenage children and one young son. Lawrence tireless efforts building the business into a thriving enterprise set the example of hard work for the Thatcher family. Lawrence was a dedicated father who was always there to help his children with their homework and school projects, even after a full day of work. Also, Lawrence was a dedicated grandfather taking every opportunity to attend grandchildren's piano recitals, plays, or other events. He loved playing golf with his youngest son and spent many hours with his older son teaching him the business and discussing any subject that interested them. He remained active in the company for 50 years and came to the office every day until he formally retired at age 93.

He was an avid Utah fan and took every opportunity to attend football and basketball games.

Lawrence was a member of the Church of Jesus Christ of Latter-day Saints and held numerous ward and stake offices. He enjoyed his church service and the associations with the members of the Parleys and Monument Park stakes. He especially enjoyed his time as a temple worker in the Salt Lake Temple.

He was a proud Rotary International member, faithfully attending Club 24 meetings with his youngest son every Tuesday, at the Marriott Hotel, and serving on many service committees. He was the ideal of the Rotary model of "service above self" and followed the Rotary four-way test in his everyday business dealings and actions. He was a Paul Harris fellow and received recognition from Club 24 for his community service.

"Lawrence was committed to enriching the scientific, business, and educational community of the University of Utah. The Thatcher family, led by Lawrence and Helen, have been steadfast supporters of chemistry research and education, and in 2009 they helped establish the Thatcher Building for Biological and Biophysical Chemistry at the University of Utah. This facility provides classrooms, laboratories, and research space for training hundreds of students each year. Lawrence always wanted to positively impact the next generation of researchers, scientists, doctors, nurses, policymakers, and entrepreneurs. It was an absolute pleasure to work with him, and he will be missed."

Helen and Lawrence were devoted parents to four children: Diane (Julian) Barlow, Craig (Connie), Teri (Dean) Flanders, Tom(Kathy). 18 grandchildren and 16 great-grandchildren also survive him.
In lieu of flowers the family would appreciate a donation to the Utah Food Bank at their website,
https://www.utahfoodbank.org.