How ice in clouds is born

Something almost magical happens when you put a tray full of sloshing, liquid water into a freezer and it comes out later as a rigid, solid crystal of ice. Chemists at the University of Utah have pulled back the curtain a little more on the freezing process, particularly in clouds.

Their research shows that when water droplets freeze in clouds, the structure of the ice crystal isn’t necessarily the classic hexagonal snowflake structure. Rather, a more disordered ice structure forms more easily than hexagonal ice under certain cloud conditions, allowing the water droplets in clouds to turn to ice more rapidly than previously predicted. The work reconciles theoretical models of clouds with observations of freezing rates. The study is published in Nature.

Even in warm climates, precipitation usually starts with water droplets in clouds turning to ice. Why? “These droplets of liquid can grow to a certain size,” says Valeria Molinero, chemistry professor at the University of Utah, “but to grow to a size that is large enough that it can fall from the sky, these droplets have to grow much larger.”

The best way to grow larger is to turn to ice. A small atmospheric particle, called an aerosol, can start the process of freezing in chilled water. Or the process can start spontaneously, with a small region of ordered water molecules appearing within the droplet. If that “crystallite” is large enough, then the droplet can freeze and continue to grow by pulling in the surrounding water vapor. The process of crystals growing from a small nucleus is called nucleation. 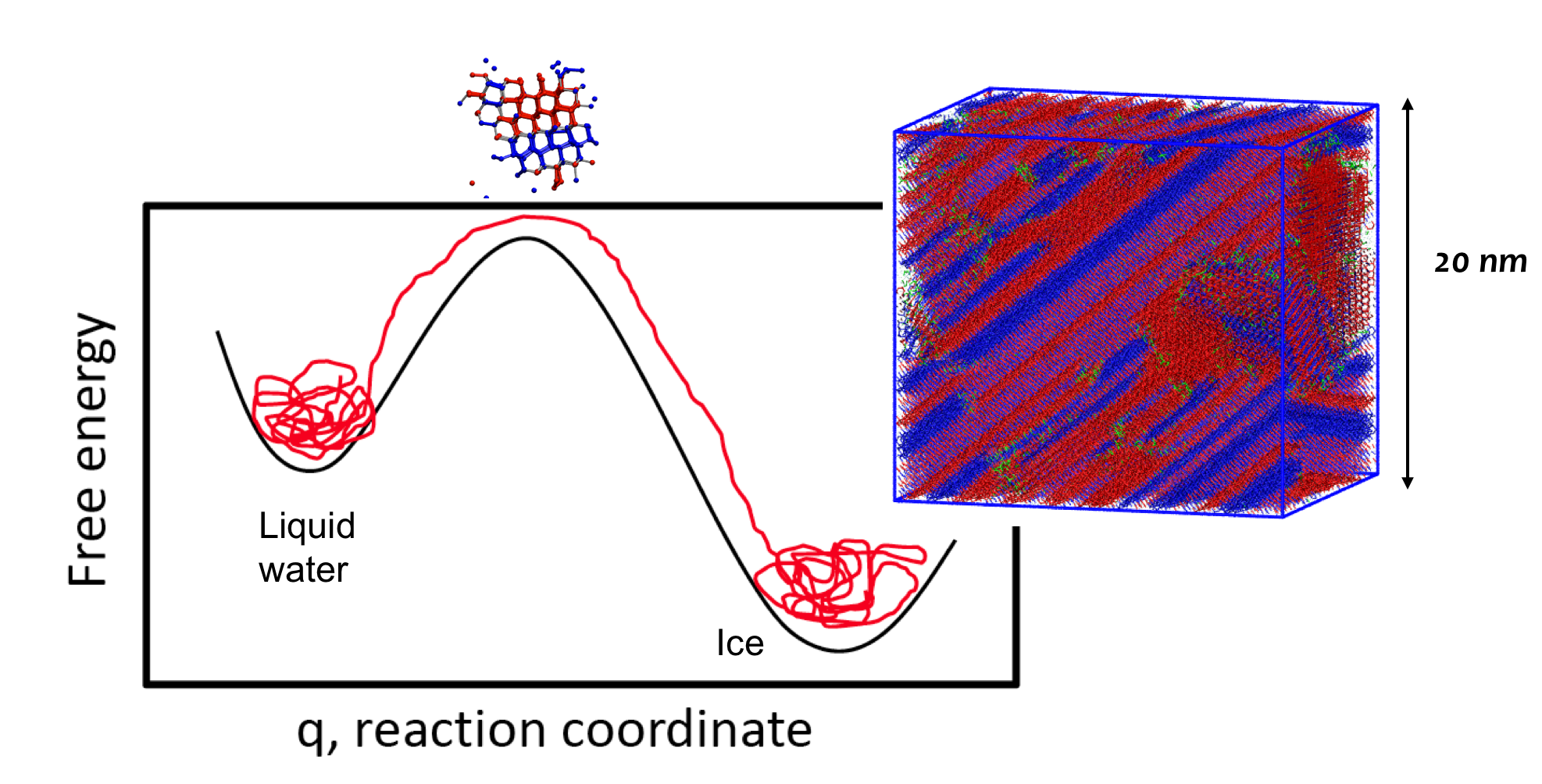 Small crystal nuclei face a barrier to growth. Because of the interactions between a small solid and its liquid surroundings, a crystallite has to grow to a certain size to be able to continue growing and not simply melt away. Picture a hill. If you push a rock up a hill but don’t make it all the way to the top, the rock rolls back down to where you started. But if you push it far enough, it rolls down the other side. The top of the hill (called the free energy barrier) sets the critical size for continuing to grow the crystallite.

“The focus of our paper is showing what the structure of the crystallite at the top of this barrier is and what is the implication for the rate of nucleation,” Molinero says.

Previously, chemists assumed that the structure of ice at the top of the energy barrier was the hexagonal structure seen in snowflakes (although snowflakes are much larger than crystallites). It’s a very stable structure. “The assumption that it’s hexagonal is the more intuitive one,” says Laura Lupi, a postdoctoral scholar and first author on the Nature paper.

Previous simulations found that under some cloud conditions, however, crystallites with a disordered structure were more favored. These “stacking disordered” structures are a layer-cake mix of molecules that don’t settle into either the hexagonal or cubic crystal structure. In their study, Lupi and Molinero found that at a temperature of 230 K, or -45 degrees Farenheit, the free energy barrier for the stacking disordered crystallite is 14 kJ/mol smaller than that for hexagonal ice. In other words, disordered ice has a “hill” much smaller than hexagonal ice and forms around 2,000 times faster.

This helps cloud modelers understand better their observational data regarding freezing rates in clouds. Previous nucleation models using hexagonal ice couldn’t capture all of a cloud’s behavior because those models extrapolated nucleation rates across cloud temperatures without understanding the effects of temperature on those rates. Lupi and Molinero’s study begins to correct those models. “Rates of ice nucleation can only be measured in a very narrow range of temperatures,” Molinero says, “and it is extremely challenging to extrapolate them to lower temperatures that are important for clouds but inaccessible to the experiments.”

By virtue of their size, snowflakes are more stable as hexagonal ice, Lupi and Molinero say. Their findings only apply to very small crystallites. Lupi says that their work can help cloud modelers create more accurate models of the phase of water within clouds. “If you have so many water droplets at a certain temperature, you want to predict how many will turn into ice droplets,” she says. Better cloud models can lead to better understandings of how clouds reflect heat and produce precipitation.

Molinero says that their work improves fundamental understanding of how quickly water forms ice – a process that plays out in clouds and freezers every day. And it is a process, not an instantaneous event, Molinero adds. “The transformation is not just that you go below zero and that’s it,” she says. “There’s a rate at which the transition happens, controlled by the nucleation barrier. And the barrier is lower than previously anticipated.”

This work was supported by the National Science Foundation.

This press release and images can be found here.
Find the full study here.