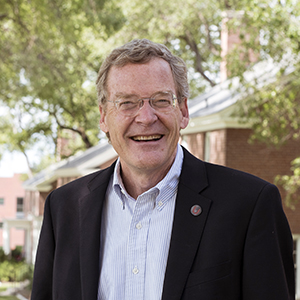 Tom is not recruiting new Ph.D. graduate students into his lab. Undergraduates are welcome to apply for research positions in his lab.

Our research in inorganic chemistry continues to focus on the organometallic chemistry of fluorocarbons. We seek to develop transition metal systems which are capable of reacting with fluorocarbons - the most inert class of compounds created by chemists. In particular we seek new ways of selectively activating and functionalizing fluorocarbons using metals as catalysts to control these transformations. We also attempt to elucidate the mechanisms involved in these transformations.

Our initial discoveries in this field involved the use of suitably designed chelating ligands to activate and functionalize C-F bonds in aromatic systems at low valent metal centers. For exapmple, tungsten(0) readily inserts into an aromatic C-F bond of an imine ligand under mild conditions. Alkyne migratory insertion into the newly formed tungsten-aryl carbon bond provides one route to form a C-C bond from a C-F bond. The organometallic reaction chemistry of these metal-fluoride complexes is quite diverse and we have discovered examples of halocarbon coordination compounds, h2-bound aldehyde and ketone complexes, 4-electron donor nitrile and alkyne complexes, and examples of CO and CO2 activation within the context of this ligand framework. Importantly this chemistry also provided the intellectual groundwork for the discovery of intermolecular systems capable of C-F bond activation reactions in totally saturated perfluorocarbons.

While a lack of reactivity might be considered a defining property of perfluorocarbons, they are susceptible to attack by strong reducing agents. The dramatic result of the reaction of polytetrafluoroethylene with magensium is pictured below.

Although the quartz crucible remained intact, the 4-liter beaker used to collect the graphitic soot formed shattered as a result of the heat produced by the exothermic formation of MgF2. Thus a key issue in the reaction chemistry of perfluorocarbons is one of control. Electron-rich organometallic reducing agents provide a means to induce and control the reaction chemistry of perfluorocarbons.

For example, the 19-electron complex cobaltocene reacts under mild conditions with perfluorodecalin to liberate fluoride ion and, in the presence of lithium trifluoromethanesulfonate, afford high yields of perfluoronapthalene.

The first example of a catalytic reaction of this type was discovered in our labs utilizing highly active "zircononcene" produced by reduction of (C5H5)2ZrCl2 with Mg/HgCl2. This system is also capable of reacting with perfluorocyclohexane to ultimately afford 1,2,4,5-tetrafluorobenzene where hydrogenolysis of two aromatic C-F bonds also occurs. Thus we have demonstrated that it is possible to do productive synthetic chemistry with perfluorocarbons despite the great strength of the C-F bond that is responsible for the unique physical and chemical properties of these compounds. The mechanisms and scope of these multistep reactions is a topic of current investigation.