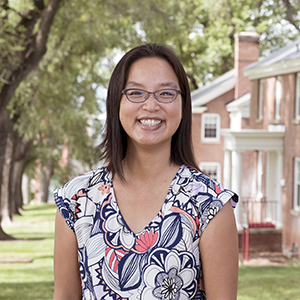 Illuminating the Single-Cell Biology and Function of Chemical Signals

The Hammond lab has a dual focus on engineering nucleic acids as programmable tools for molecular imaging and gene control, and on understanding the chemistry and biology of nucleotide-based signaling molecules in bacteria and mammalian cells. 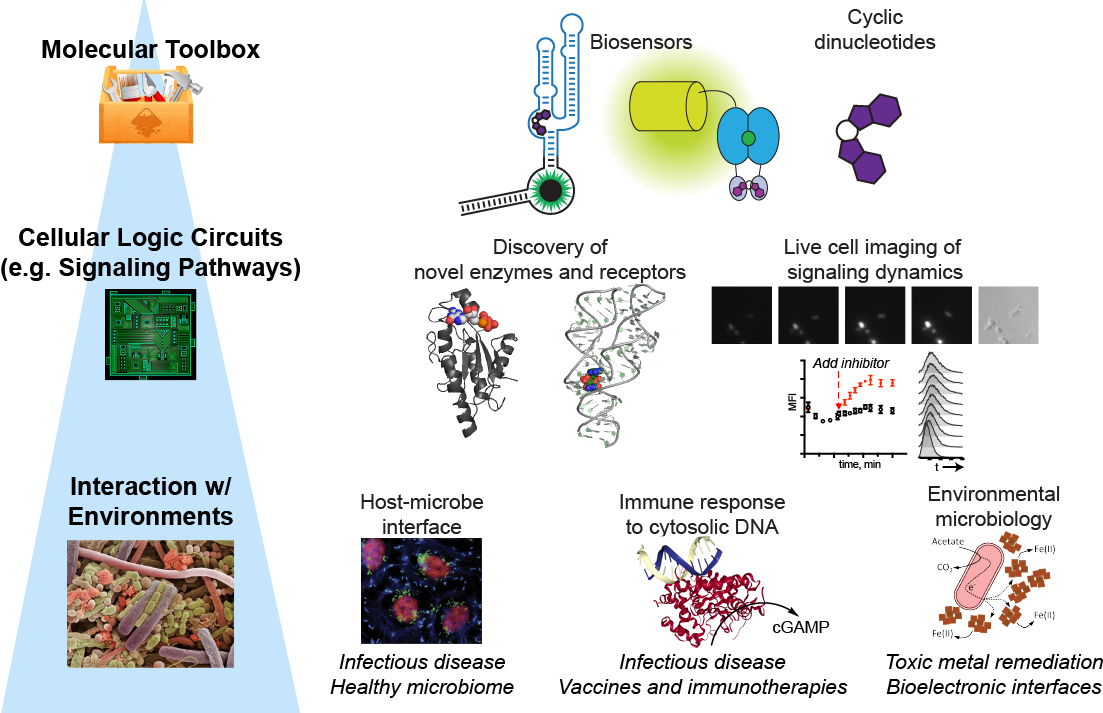 We are one of the first labs to develop fluorescent biosensors made of RNA for live cell imaging of enzyme activity. These sensors are designed by combining a riboswitch domain, which is an RNA that changes conformation upon binding a small molecule ligand, and a fluorophore-binding domain. Ligand selectivity is dictated by the riboswitch domain and can even be reprogrammed with single nucleotide changes.

Our lab has established allosteric stem design rules, novel designs, and optimization strategies for making RNA-based fluorescent biosensors from a variety of riboswitch folds. We have made biosensors with best-in-class sensitivity (sub-nanomolar limit of detection), selectivity (better than commercial monoclonal antibodies), and in vivo brightness (143% brighter than parent fluorophore-binding aptamer). We have applied these biosensors to visualize enzyme activity in both gram positive and gram negative bacteria, under aerobic and anaerobic conditions, via fluorescence microscopy and flow cytometry methods. We have 'watched' the chemical inhibition of an enzyme involved in biosynthesis of a quorum signaling molecule in live bacterial cells. We recently showed that the micronutrient zinc turns off a signaling enzyme that controls biofilm formation in E. coli, which helps to sensitize this common foodborne pathogen to antibiotics (Future of Biochemistry).

Cyclic dinucleotides are an emerging class of intracellular signaling molecules with diverse roles in bacteria and with newfound roles in innate immunity in mammalian cells. As second messengers, they are produced transiently in response to environmental stimuli and act inside the cell to change gene expression, physiology, and behavior. Given that three out of the four known cyclic dinucleotides were discovered in the past decade, much remains to be explored about their chemistry and biology. To study these chemical signals, our lab has developed fluorescent biosensors for each of the known cyclic dinucleotides. We also recently developed the first bioluminescent sensor for measuring cyclic dinucleotides in complex settings (Nat Chem Biol Research Highlight, JGI Science Highlight).

(i) Cyclic AMP-GMP (cAG) signaling: Using an in vitro biosensor assay, we discovered a cyclic AMP-GMP (cAG)-sensing riboswitch class, which was highlighted by Science Signaling as a Signaling Breakthrough of the Year. These newfound cAG riboswitches were identified in Geobacter bacteria and predicted to control these bacteria's unique ability to relay electrons outside the cell. By screening for enzyme activity using an in vivo biosensor assay, we subsequently discovered a G. sulfurreducens GGDEF enzyme that makes cAG, which is the founding member of Hypr GGDEF enzymes. This discovery is significant because for almost 30 years GGDEF enzymes were considered synonymous with the classical cyclic di-GMP signaling network; our result provides the first evidence that this enzyme class can make alternative cyclic dinucleotides to cyclic di-GMP (Berkeley news story). We are continuing to identify molecular components of the cAG signaling pathway and to understand its role in how bacteria like Geobacter sense and adapt to different kinds of surfaces.
(ii) Mammalian cGAMP signaling: The enzyme cyclic GMP-AMP synthase (cGAS) was discovered to be the innate immune sensor for cytosolic DNA, which may result from microbial infection or other pathophysiological conditions. Upon binding double-stranded DNA, cGAS produces the signaling molecule cGAMP, which activates the receptor protein, stimulator of interferon genes (STING). In collaboration with Russell Vance (UC Berkeley), we proved the chemical structure of cGAMP had a noncanonical 2'-5' linkage by NMR. We recently developed a biosensor-based platereader assay to quantitate cGAMP levels in DNA-stimulated mammalian cell lysates.