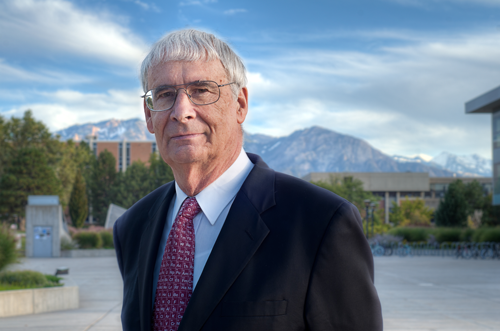 As if it wasn’t enough to make a trip to the White House and collect a National Medal of Science from the president, U organic chemist Peter Stang and his wife just spent four all-expense-paid days in Beijing attending a celebration in his honor.

The Chinese Academy of Sciences recently awarded Stang the 2015 China’s Friendship Award, which the academy says is “the People’s Republic of China’s highest award for foreign experts who have made outstanding contributions to the country’s economic and social progress.”

The award is the latest in a string for Stang, a distinguished professor of chemistry and former dean of science. In 2011, President Barack Obama hung a National Medal of Science around Stang’s neck during a White House ceremony, and a year later Stang won the highest honor from the world’s largest scientific group: the 2013 Priestly Medal from the American Chemical Society.

Stang has for years maintained collaborations with Chinese chemists, and he believes that is a key factor in winning China’s Friendship Award, which he will accept during the Sept. 28-Oct. 1 celebration in Beijing.

“I am deeply honored, humbled and delighted to receive this most prestigious award,” he says. “As I understand it, this is not just for my chemistry but also – and perhaps even more so – for facilitating scientific collaborations between the U.S. and China.”

Stang is a pioneer in the field of supramolecular chemistry, which involves the spontaneous formation of large, complex molecules from predesigned, simple molecules that Stang compares with building blocks. Many compounds he built this way have antitumor activity, he says.

Stang’s numerous ties to China include working closely with Chinese chemists in his role as editor of the Journal of the American Chemical Society; serving as a foreign member of the Chinese Academy of Sciences; leading a 2005 American Chemical Society delegation to China to boost collaboration; and maintaining collaborations with chemists at the Chinese academy’s Institute of Chemistry, Hunan University and Zhejiang University in Hanghou.

Lee Siegel is a senior science writer at University Marketing and Communications. If you have an interesting story idea, email him at lee.siegel@utah.edu.