Jul. 10, 2018 - How do insects survive harsh northern winters?  Unlike mammals, they don’t have thick coats of fur to keep warm. But they do have antifreeze. Antifreeze proteins (AFPs) prevent ice from forming and spreading inside their bodies.

The existence of these AFPs has been known for decades, but the mechanisms governing this unique survival technique have proven difficult to determine. A new study published in the Proceedings of the National Academy of Sciences by researchers at the University of Utah and University of California, San Diego, shows how AFPs function while also providing a direction for future research.

AFPs prevent water from freezing by surrounding and quickly binding to small ice crystals, where water has already managed to order itself into an ice lattice. Left unattended, these crystals would otherwise act as seeds and continue to spread their ordering to neighboring water molecules. The prevailing hypothesis for how AFPs stop this mechanism has been the preordering of an ice-like layer of water near the site of the protein that binds to the ice surface. However, primarily due to the difficulty of isolating this small region in experiments from the surrounding ice and water, this had yet to be proven, says U chemistry professor Valeria Molinero.

Focusing on the AFP of the mealworm beetle, Tenebrio molitor (TmAFP), the study aimed to test this hypothesis through theoretical methods at different resolutions of space and time. Molinero specializes in simulating ice at larger scales and applied this expertise to a system with TmAFP in water approaching an ice surface. With this setup, she and her doctoral student Arpa Hudait observed the protein slowly tumbling above the ice surface. They discovered that to latch on to the ice, all TmAFP requires is to be parallel to the surface.

Importantly, however, this anchoring did not require any prior ordering of the water into an ice-like structure. “The slow movement of the protein to be parallel to the ice surface is followed immediately by a fast reorientation of the nearby water to bind the protein to the ice,” Hudait says. In insects like the mealworm beetle, this binding of many AFPs to developing ice crystals prevents further crystallization of ice in their bodies. 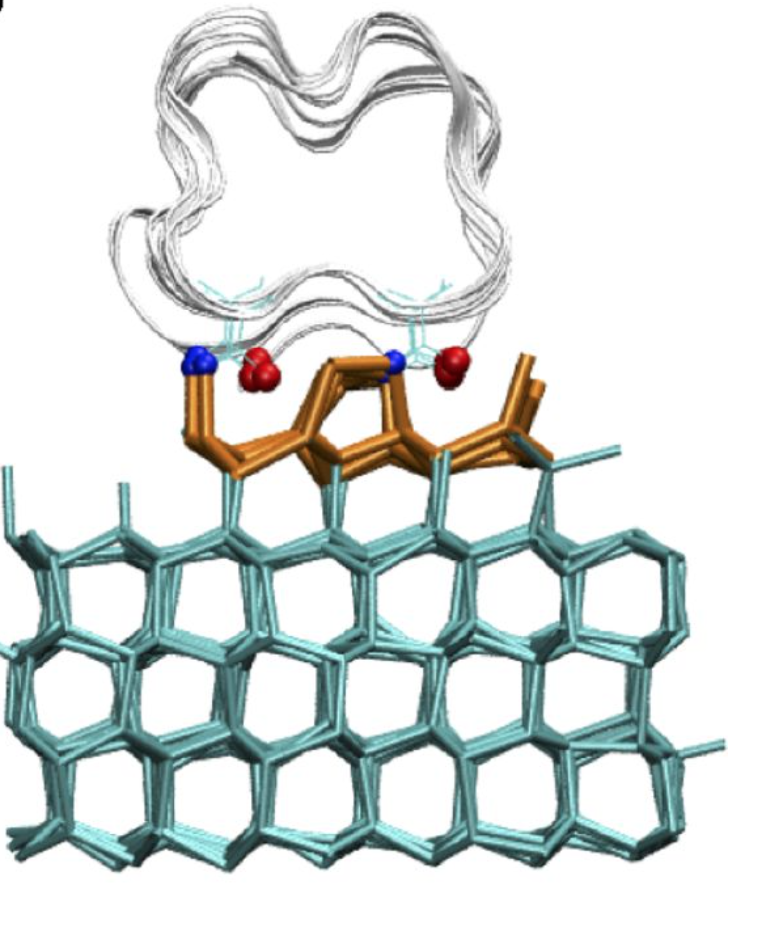 How to watch it happening

But Molinero’s methods lacked the accuracy necessary to create spectroscopic predictions of what the binding event would look like to spectroscopic instruments. With his highly accurate water model, Francesco Paesani of UCSD and his postdoctoral researcher, Daniel Moberg, collaborated with Molinero and her team to calculate both the infrared and Raman spectra with unprecedented accuracy. “Simulations have the advantage of being able to isolate any desired region, though this is only useful if the underlying theory is accurate enough,” explains Paesani.

This was the first study to have determined the signal from only the structures anchoring the protein to the ice surface, called clathrates. “Our results show that infrared spectroscopy is unlikely to provide much information on the anchored clathrate structure,” says Moberg. “Raman spectroscopy, however, should show differences if experimentalists can isolate the signal from the binding site or anchored clathrate.”

The findings can lend insight to studies of ice nucleating proteins in the atmosphere, which perform the opposite task and play a role in forming ice crystals in clouds. “We predict that preordering could emerge on the large surfaces of aggregated ice-nucleating proteins, where it may serve the opposite role of assisting with ice nucleation in clouds,” Molinero says.

There’s widespread interest in learning to mimic the antifreeze mechanism of AFPs, she adds, with applications from organ preservation to plane de-icing. “There's a big potential market for antifreeze based on the same mechanism, but if you don't understand the mechanism it's difficult to define and optimize molecules.”

This study was funded by the National Science Foundation. This release is adapted from text provided by Daniel Moberg.