Former University of Utah Chemistry faculty member John Gladysz and Janet Bluemel have made provisions in their estate plan for a future endowed chair in the Department. John and Janet, professors at Texas A&M University and husband and wife, are world leaders in the fields of inorganic and organometallic chemistry.

John and Janet wanted to leave a lasting impact on the institutions that were integral to their careers as professors and scientists. “Chemistry has always been an important and exciting part of life for both of us,” Janet said about why the couple will leave this gift. John further explained, “We wanted to do something that would help chemistry in the future, as well as subsequent generations of chemists.” The couple also made significant bequests to the chemistry departments of Texas A&M, the University of Michigan, and Western Michigan University.

By creating an endowed chair in the Department, John and Janet hope to bolster the future of science. “Both Janet and I think a lot about the crucial role of fundamental research, and we hope that our gift will help this to continue in Utah, where twenty years down the road, who knows what the budget situation will be. Our gift will allow basic studies to carry on regardless,” said John. The John A. Gladysz and Janet F. Bluemel Chair of Chemistry will be filled by an outstanding researcher in any area of organic or inorganic chemistry, and funds from the endowment will support the teaching, research, service and professional development of the holder.

John, now a Distinguished Professor and holder of the Dow Chair in Chemical Invention at Texas A&M, was a member of our Department faculty from 1982 to 1998. He and Janet, also a Professor at Texas A&M, were married in the University of Utah’s Red Butte Garden in 1997. 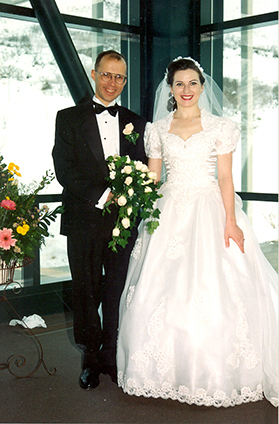 “I essentially planned the entire event,” John remembers. “Due to Janet's teaching obligations, she could only fly in about three days before, right around Christmas. So my research group and I taste tested the champagne, selected the menu, found the preacher, and hired the musician. I’d never done anything like that, but we just approached it like anyone with chemistry training would in terms of organizational deployment. And it turned out to be a magical afternoon.”

“We’ll always remember that Red Butte wedding with the research group, colleagues, departmental alumni, and close relatives who had grown fond of visiting Utah. It was sad just a few months later to tell so many of those individuals goodbye,” John said. From Utah, the couple moved to Germany for ten years, and then back to the States to join the faculty at Texas A&M. John looks back on his time as a professor at the U fondly. “I always viewed Utah as an extremely welcoming place for faculty. It didn’t matter if you were a junior faculty member or a mid-career hire, we did a great job making people feel like they had a supportive department and a superb place to do research. I always felt an incredibly enabling atmosphere.”

Planned giving is a vehicle for leaving a legacy that will continue to strengthen the world of chemistry far into the future. And according to John Gladysz and Janet Bluemel, “establishing that legacy at Utah was an obvious choice.”

Leaving a gift to the U through your will or trust is one of many ways to make a planned gift. To learn more about creating a legacy of your own in the Department of Chemistry, contact Department Chair Cindy Burrows.