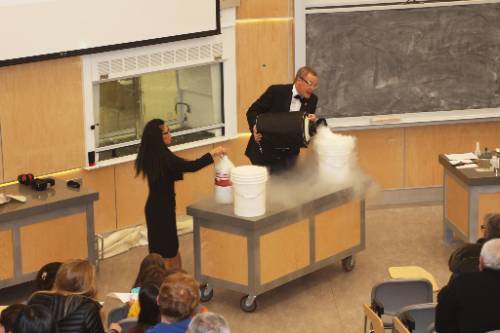 Join chemistry professors Janis Louie and Tom Richmond as they perform an extraordinary series of chemical experiments that educate and entertain audiences of all ages. This year, the event will be held live via zoom and will feature friend of the chemistry department, Tom Thatcher. Tom will discuss the experiments with Professors Louie and Richmond, giving viewers a behind-the-science view on how the experiments work.

The lectures are named after Michael Faraday, the discoverer of electromagnetic induction, electro-magnetic rotations, the magneto-optical effect, diamagnetism and field theory. Faraday served as director of the Royal Institute in London from 1825-1867 and enhanced its reputation as a center for scientific research and education. A gifted lecturer, he began presenting his Christmas Lectures for Children at the Royal Institute in the mid-1820s. With Faraday as their guide, audiences entered wholeheartedly into the world of science. In this tradition, the Department of Chemistry has given the annual Faraday Lectures since 1981.